Interclouds And The Future of Cloud Computing

Cloud to Cloud Interoperability and Federation

Who has thought back in 2012 that we will have so many (public) cloud providers like AWS, Azure, Google Cloud, IBM Cloud, Oracle Cloud etc. in 2022?

10 years ago, many people and companies were convinced that the future consists of public cloud infrastructure only and that local self-managed data centers are going to disappear.

This vision and perception of cloud computing has dramatically changed over the past few years. We see public cloud providers stretching their cloud services and infrastructure to large data centers or edge locations. It seems they realized, that the future is going to look differently than a lot of people anticipated back then.

I was not aware that the word “intercloud” and the need for it exists for a long time already apparently. Let’s take David Bernstein’s presentation as an example, which I found by googling “intercloud”:

This presentation is about avoiding the mistake of using proprietary protocols and cloud infrastructures that lead to silos and a non-interoperable architecture. He was part of the IEEE Intercloud Working Group (P2302) which was working on a standard for “Intercloud Interoperability and Federation (SIIF)” (draft), which mentioned the following:

Currently there are no implicit and transparent interoperability standards in place in order for disparate
cloud computing environments to be able to seamlessly federate and interoperate amongst themselves.
Proposed P2302 standards are a layered set of such protocols, called “Intercloud Protocols”, to solve the interoperability related challenges. The P2302 standards propose the overall design of decentralized, scalable, self-organizing federated “Intercloud” topology. 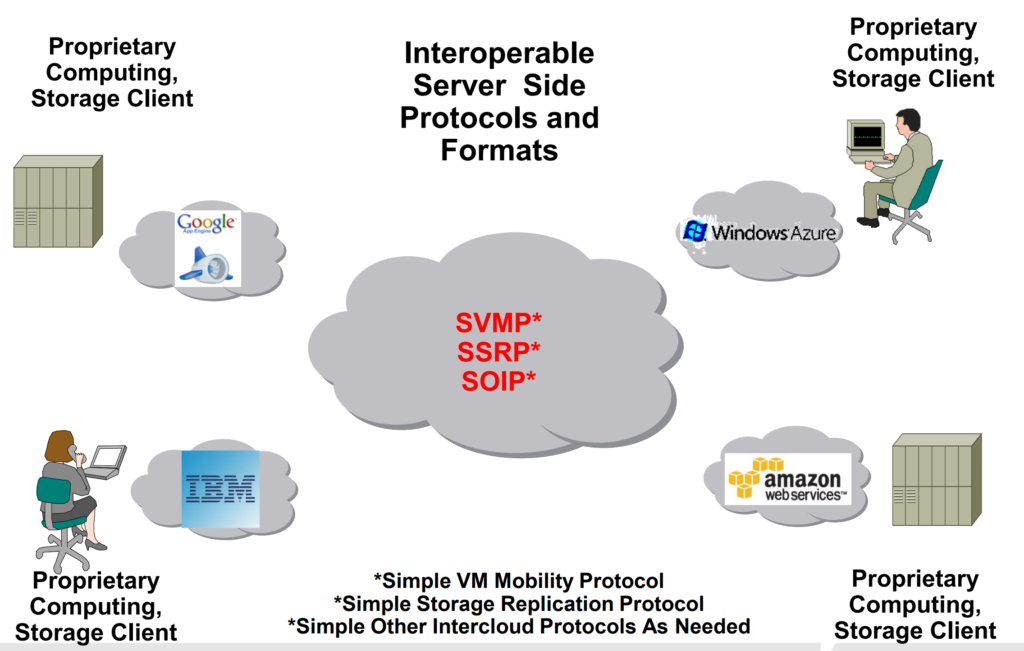 I do not know David Bernstein and the IEEE working group personally, but it would be great to hear from some of them, what they think about the current cloud computing architectures and how they envision the future of cloud computing for the next 5 or 10 years.

Cisco in 2008 (it seems that David Bernstein worked at Cisco that time). Intercloud is a network of clouds that are linked with each other. This includes private, public, and hybrid clouds that come together to provide a seamless exchange of data.

teradata. Intercloud is a cloud deployment model that links multiple public cloud services together as one holistic and actively orchestrated architecture. Its activities are coordinated across these clouds to move workloads automatically and intelligently (e.g., for data analytics), based on criteria like their cost and performance characteristics.

The Future of Cloud Computing 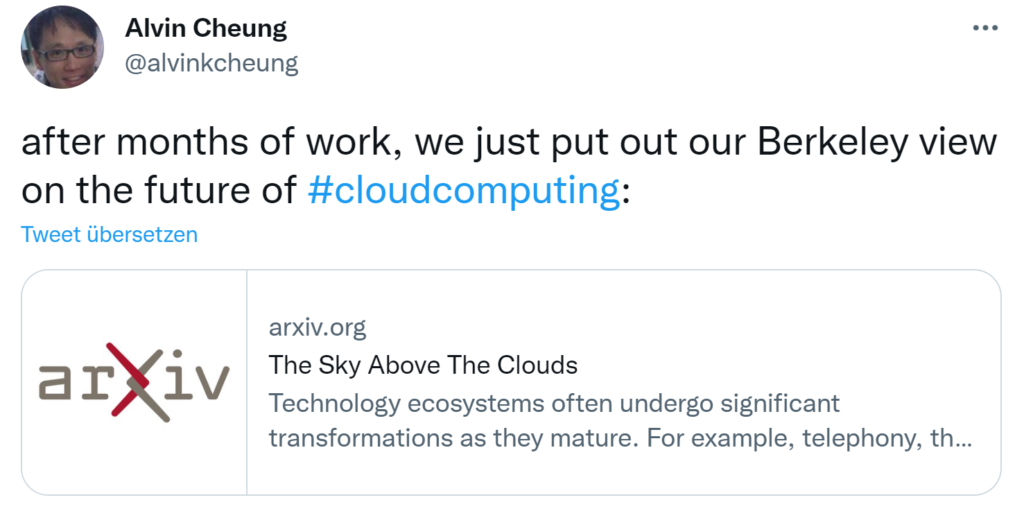 Alvin Cheung is an associate professor at Berkeley EECS and wrote the following in his Twitter comments:

we argue that cloud computing will evolve to a new form of inter-cloud operation: instead of storing data and running code on a single cloud provider, apps will run on an inter-operating set of cloud providers to leverage their specialized services / hw / geo etc, much like ISPs.

Alvin and his colleagues wrote a publication which states “A Berkeley View on the Future of Cloud Computing” that mentions the following very early in the PDF:

We predict that this market, with the appropriate intermediation, could evolve into one with a far greater emphasis on compatibility, allowing customers to easily shift workloads between clouds.

[…] Instead, we argue that to achieve this goal of flexible workload placement, cloud computing will require intermediation, provided by systems we call intercloud brokers, so that individual customers do not have to make choices about which clouds to use for which workloads, but can instead rely on brokers to optimize their desired criteria (e.g., price, performance, and/or execution location).

We believe that the competitive forces unleashed by the existence of effective intercloud brokers will create a thriving market of cloud services with many of those services being offered by more than one cloud, and this will be sufficient to significantly increase workload portability.

Organizations place their workloads in that cloud which makes the most sense for them. Depending on different regulations, data classification, different cloud services, locations, or pricing, they then decide which data or workload goes to which cloud.

The people from Berkeley do not necessarily promote a multi-cloud architecture, but have the idea of an intercloud broker that places your workload on the right cloud based on different factors. They see the intercloud as an abstraction layer with brokering services: 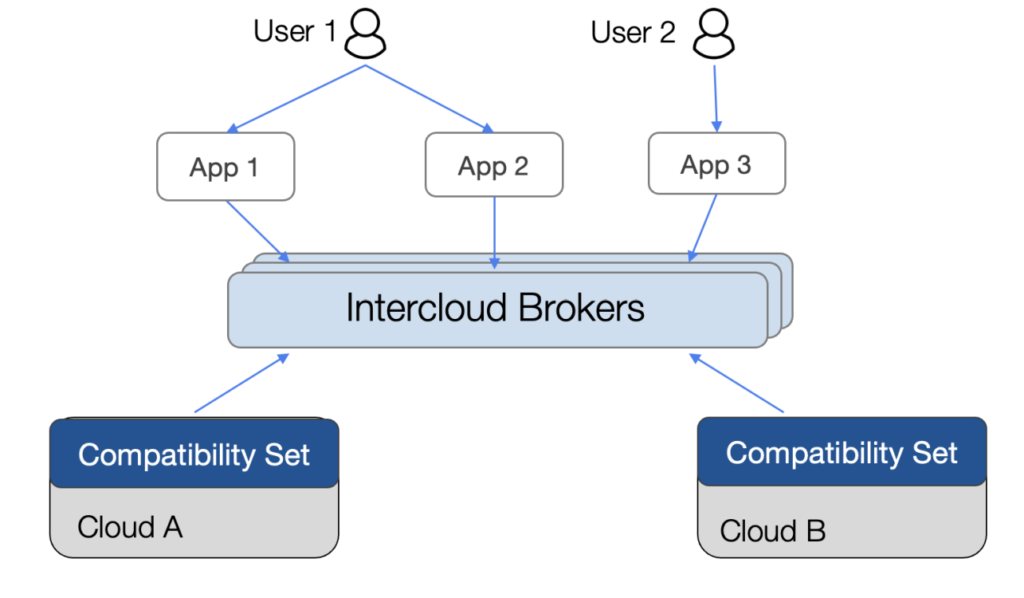 In my understanding their idea goes towards the direction of an intelligent and automated cloud management platform that takes the decision where a specific workload and its data should be hosted. And that it, for example, migrates the workload to another cloud which is cheaper than the current one.

Which means, that a modern application is something that can adapt to any environment and perform equally well.

The challenge today is that we have modern architectures, new technologies/services and multiple clouds running with different technology stacks. And we have Kubernetes as framework, which is available in different formats (DIY or offerings like Tanzu TKG, AKS, EKS, GKE etc.)

Then there is the Cloud Native Computing Foundation (CNCF) and the open source community which embrace the principal of “open” software that is created and maintained by a community.

It is about building applications and services that can run on any infrastructure, which also means avoiding vendor or cloud lock-in.

Challenges of Interoperability and Multiple Clouds

If you discuss multi-cloud and infrastructure independent applications, you mostly end up with an endless list of questions like:

Workload Mobility and Application Portability without an Intercloud

VMware has a different view and approach how workload mobility and application portability can be achieved.

Their value add and goal is the same, but with a different strategy of abstracting clouds.

VMware is not building an intercloud but they provide customer a  technology stack (compute, storage, networking), or a cloud operating system if you will, that can run on top of every major public cloud provider like AWS, Azure, Google Cloud, IBM Cloud, Oracle Cloud and Alibaba Cloud.

This consistent infrastructure makes it especially for virtual machines and legacy applications extremely easy to be migrated to any location.

What about modern applications and Kubernetes? What about developers who do not care about (cloud) infrastructures?

At VMworld 2021, VMware announced the technology preview of “Project Cascade” which will provide a unified Kubernetes interface for both on-demand infrastructure (IaaS) and containers (CaaS) across VMware Cloud – available through an open command line interface (CLI), APIs, or a GUI dashboard.

The idea is to provide customers a converged IaaS and CaaS consumption service across any cloud, exposed through different Kubernetes APIs. 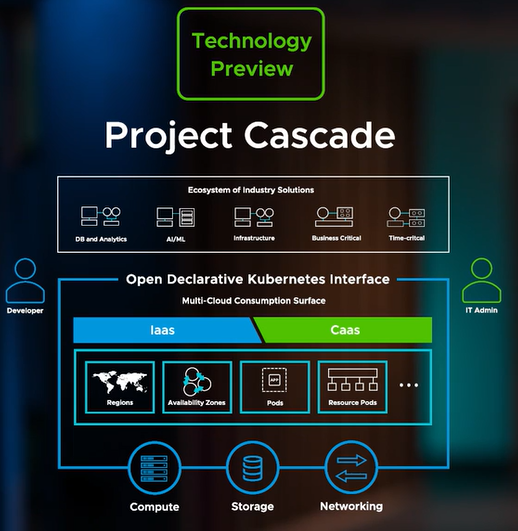 I heard the statement “Kubernetes is complex and hard” many times at KubeCon Europe 2022 and Project Cascade is clearly providing another abstraction layer for VM and container orchestration that should make the lives of developers and operators less complex.

Another project in tech preview since VMworld last year is “Project Ensemble“. It is about multi-cloud management platform that provides an app-centric self-service portal with predictive support.

Project Ensemble will deliver a unified consumption surface that meets the unique needs of the cloud administrator and SRE alike. From an architectural perspective, this means creating a platform designed for programmatic consumption and a firm “API First” approach.

I can imagine that it will be a service that leverages artificial intelligence and machine learning to simplify troubleshooting and that is capable in the future to intelligently place or migrate your workloads to the appropriate or best cloud (for example based on cost) including all attached networking and security policies.

I believe that VMware is on the right path by giving customers the option to build a cloud-agnostic infrastructure with the necessary abstraction layers for IaaS and CaaS including the cloud management platform. By providing a common way or standard to run virtual machines and containers in any cloud, I am convinced, VMware is becoming the defacto standard for infrastructure for many enterprises. 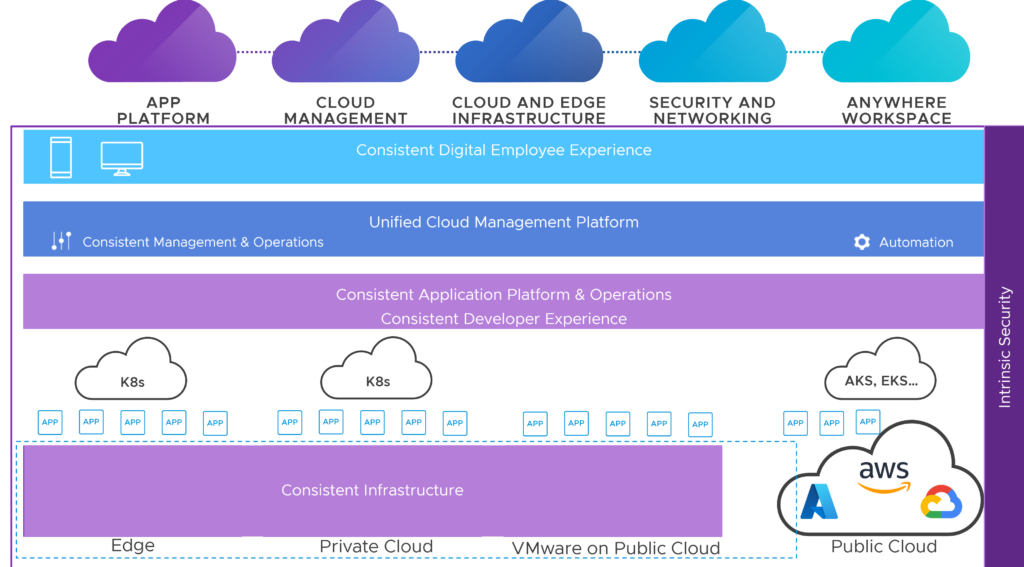 By providing a consistent cloud infrastructure and a consistent developer model and experience, VMware bridges the gap between the developers and operators, without the need for an intercloud or intercloud protocol. That is the future of cloud computing.